The young Albert Fuller in the Washington National Cathedral 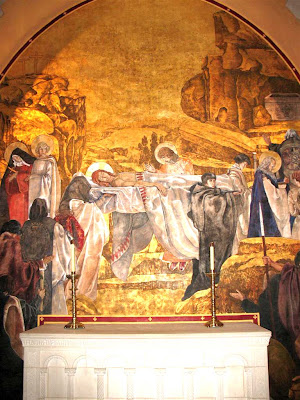 Albert Fuller as the angel with flaming feet in John de Rosen's mural
in the Washington National Cathedral's Chapel of St. Joseph of Arimathea:
"The Entombment of Christ" (photo credit: Moon)
Oct. 31 brought the Washington, DC premiere of Apparition of the Eternal Church, the Messiaen film of which Albert is both star and muse. The following day, I played, with pianist Jerome Lowenthal, the DC premiere of Messiaen's newly published violin and piano Fantaisie along with the other two Messiaen violin pieces - and since all three are short, Jerry and I filled out our hour in the Coolidge Auditorium with ten minutes of his giving a kind of Peter and the Wolf lecture-performance of "The Loriod" from the Bird Catalogue, and my reading from my book based on the film (thus also starring Albert) OH MY GOD: Messiaen in the Ear of the Unbeliever.
Because I played the recital on a Library of Congress violin (the "Betts" Stradivarius), I needed to be in DC a few days before the concert to get to know the instrument. I had enough spare time to tour around the city with friends who live there, and the three of us spent one afternoon at the Washington National Cathedral. That's where Albert was a boy soprano and discovered the organ, his "first instrument," within whose swell box he would have, as a young boy, the formative erotic experience he describes so gracefully both in the movie and in his memoir Alice Tully: An Intimate Portrait. The Bishop's Garden of the cathedral is where Albert's ashes are scattered, and so my visit was more of a religious experience than I usually associate with going to church.
What I'd forgotten about until we got to the cathedral was the presence there of a mural Albert modeled for when he was in high school. Described on page 48 of OH MY GOD, the mural is called "The Entombment of Christ" and features an angel with flaming feet, for whom Albert was the 16 year-old model (an irony he later noted, given his struggle with peripheral neuropathy). The library had sent me xerox images of the mural, but my friend Moon took the above picture, which gives a much better idea of the work.
Also wonderful to see St. Alban's School, the setting of so many Albert stories, and the Church of the Ascension and St. Agnes, where Albert got fired from his last organ job for playing "oriental and barbaric music" during a service (Bach's chorale prelude "Oh man, now weep for thy great sin").
Posted by Paul Festa at 9:13 PM 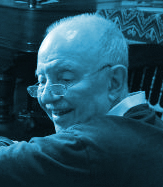